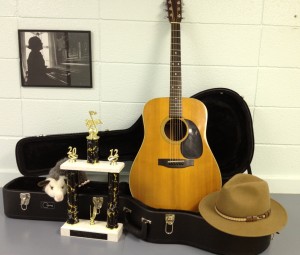 Then the emcee said, “The winner of the 2012 National Thumbpicking Guitar Contest comes from Greenwood, Indiana.” With that introduction he called my name as this year’s national thumbpicking champion.

In 2005, I moved to Indiana. The Christian Church (Disciples of Christ) in Indiana had called me as their minister for church multiplication. It was an exciting opportunity, and the move would get me closer to my home in Kentucky and the family that still lived there.

I had no idea of the road that would open up. I thought I was coming here for ministry, and I was, but the good Lord needed to remind me that my music and my ministry go hand in hand. They can’t be separated.

I’ve written about meeting John Matsel and how he taught me the thumb and finger style of guitar that Merle Travis made popular in the 1950s and 60s. I’ve written about the encouragement I’ve received from outstanding musicians like Kara Barnard. Once again I’m in their debt for giving me encouragement when I needed it and for straightening me out when that was called for.

The award is an honor, and it reflects the work I continue to do toward being the best guitarist I can. More than that, though, it’s an appreciation for a style of music, for a community of people that love it and for sharing the music with a new generation of guitarists.