On a Short Break 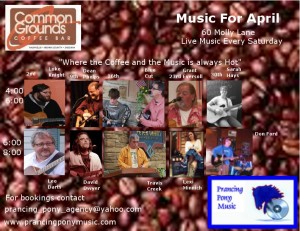 After a great weekend in central Kentucky and southern Indiana and after playing an enjoyable two sets at Muddy Boots Cafe, I’m taking a brief break with only a few gigs in April. On Saturday, April 9, I’ll head back to Nashville, Ind., to play a couple of sets at Common Grounds. I’ll be playing the 4:00-6:00 slot.

Common Grounds is not the easiest place to find. It’s on Molly Ln., which is a narrow alley, and the shop is located just west of Van Buren St. It’s not marked as Common Grounds (at least I didn’t see a sign with that name last time I was there), but if you walk back that alley, it will be obvious that you’re coming to a coffee shop. Come on in for some hot coffee and hot tunes.

On April 16, I’ll be providing entertainment for a new farmers’ market on the south side of Indianapolis. The Round Hill Nursery Farmers’ Market will be held on Saturday afternoons this spring and summer at Round Hill Nursery, 5225 S. Meridian St., from 2:00 until 6:00 p.m.

Then on April 30, I will headline the Otterbein Community Concert Series at Otterbein United Methodist Church in Greenfield. The Otterbein series is a wonderful event, so I want to write in more detail about it later. I opened for Brian Milner as part of last year’s series, and I’m looking forward to returning. Grant Eversoll will open the evening.

No shows booked at the moment.