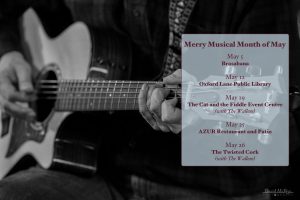 Since returning home to central Kentucky a little over a year ago, I have been sharing music regularly at a couple of area restaurants. Providing music in a restaurant or cafe setting is different than performing music for an audience from a stage. The musician takes on a different but important role.

One night, after sharing music at a local restaurant, I left in a hurry, and the manager did as well. In the hustle, I left something behind. Dropping by the store the next day, I had the chance to talk more with the staff of the restaurant. One gave me what I considered a high compliment: “We get more positive responses to you, I think, than anybody else who plays here.”

That tells me that I understand my role.

I’ve noticed. Occasionally, patrons will be attentive to me—I do tend to get the attention of children who are fascinated—but generally folks are not focused on what I’m doing. From time to time someone may applaud a song, but more often not. Appropriately, they are focused on their meal, their company, their conversation.

Sometimes, though, I will glimpse it. I’ll see a foot tapping. Someone’s head will be nodding in rhythm while they talk or listen or sample the fare. Their attention doesn’t leave the table, but the music still connects.

That’s when I know I’m doing my job. I’m fulfilling my role as musician in that setting.

Would their meal have tasted the same without the music? Probably. It would have contained the same ingredients and come from the same kitchen. The meal would have been prepared the same, but the music from a musician present in the room added an extra dimension to their experience. The food may have been the same, but the music contributed to the memory of time spent with family and friends. It enhanced their dining experience. Their recollection of the evening is just a little bit sweeter.

The musician’s role is not always that of the on-stage performer, receiving adulation. Sometimes, maybe most of the time, I think, the musician’s job is simply to breathe an extra slice of joy into the air, to augment appreciation, to bind the memory of time well spent.